EXHIBITION | Inside Her Clothes 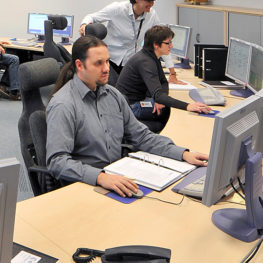 At first glance, the two dresses look nearly identical.  Both are made from a lightweight grey fabric.  Both drape loosely over the body.  They both are decorated with dozens of identical fabric covered buttons.  Both would have taken significant skill and time to make.

If you take a closer look, however, the dresses couldn’t be more different.  One, made c. 1925, uses significant amounts of hand sewing.  The other one, made in 1924, is almost entirely machine sewn.  The older dress is clearly made of silk, while the younger dress appears to be made from rayon.  Inside of the c. 1925 dress is a second, hidden bodice made of a soft netting that opens at center front with a row of hooks and eyes.  Meanwhile, the dress from 1924 has no inner structure.

Inside Her Clothes, invites visitors to explore a side of garments not often shown to the public.  Several dozen garments from the Goldstein collection are displayed inside out or in other creative ways so that visitors can see them from a new perspective.

This exhibit encourages visitors to think about how clothing is made and used, while at the same time celebrating the hard work and creativity of those who make clothing.